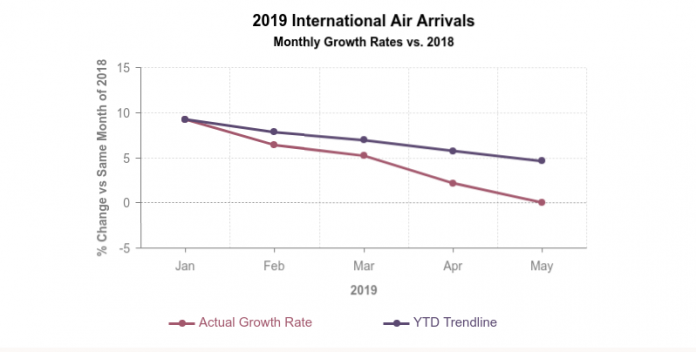 Is Airbnb Killing Small Hotels in Costa Rica? Are fewer tourists coming? Is the VAT a game-changer? We dig into last month’s stats from ICT.

ICT’s stats for May 2019* have been released, and at a glance the number of airline arrivals to Costa Rica don’t appear to back up the impression that May was a bad month for tourism. But neither do the details do much to counter the impression of market contraction. As is usual with statistics, competing interpretations are possible, but our interpretation is that a combination of market factors, significantly including the growth of short-term rentals, are at the crux of current anxieties.

As previously reported, there was much chatter among tourism providers last month about an apparently noticeable drop in guests during the month of May, after a strong 2019 Q1. Some speculated about a possible U.S. travel recession, while others cast blame elsewhere, such as high prices, high taxation, and highway construction.

We heard from one panicked Manuel Antonio accommodation provider (we’ll call her “Dana” to respect her privacy) who’s so concerned about negative cash flow as a result of unrented rooms that she’s considering a precipitous drop in room prices in an effort to compete for what appears to be a smaller share of market visitors.

Is the market shrinking or not?

ICT’s report indicates that for May 2019, visits from the U.S. were up 2.8% over the same period in 2018, but Canada was down 2.1%, and Mexico dropped 12.1%. However, as the U.S. accounts for the largest actual numbers of visitors by far, comparing percentages in growth between countries isn’t very meaningful. Overall, in May there was a net gain in visitors from North America of 1.3% compared to May 2018. This was a slight improvement over April.

European visitors showed similar patterns with an increase in arrivals of 1.5% over May 2018.

It’s important to reiterate, though, that we’re talking about rates of growth in the number of arrivals, not actual arrival rates, and not month-to-month trends for which there are many variables, like typical seasonal fluctuations (ie: we see fewer Canadians arriving in months when Canada is sunny and hot, which is perfectly normal).

If the numbers are reliable, it doesn’t look like the sky is falling, even if recent growth seems weak. So what’s going on? Why do so many people in the tourism business feel that business is suffering? At least as many North American visitors got off of planes at Costa Rican airports in May 2019 as in May 2018, even a very small gain. What are they doing when they get here? They’re not likely camping in parks in Alajuela, but nor are they, apparently, checking into hotels in traditionally reliable numbers.

Is it possible that increasing numbers are choosing to stay in off-the-books short-term rentals (Airbnb, VRBO)? Exact numbers aren’t clear, but it has been reported (here and here) that Airbnb properties in Costa Rica hosted about 524,000 guests during 2018, which was an increase of somewhere between 54% and 64% over the previous year, depending on which sources you use. If we accept the conservative figure (54%), that’s 187,000 more people who chose STRs over traditional licensed accommodations in 2018. How many more did the same in 2019? If the same growth rate applies (54%), another 282,000 people will choose Airbnb over official accommodations in 2019. These are large numbers, and certainly might account for reports of occupancy declines that seem inconsistent with rates of arrivals.

The impacts of this vary. Our acquaintance in Manuel Antonio, Dana, who operates a half dozen self-contained villas, is an example of someone who may be more affected by the impact of STRs than other categories of accommodations. Unlike the STRs, she has a business license and pays taxes, and because she has a small number of rooms in a single category, she doesn’t have much opportunity for innovative pricing or value-added service like a larger hotel has. She’s already serving the budget end of the tourism market, the same market that STRs are most adept at exploiting, and that doesn’t leave her much leeway.

May and June travellers are typically more of the budget variety than in earlier months. With the market flooded with these travellers and the increasing preponderance of STRs appealing to them, something like a ‘perfect storm’ scenario starts to emerge in which licensed accommodations competing for the same market segment – like Dana – almost inevitably suffer. While it’s likely that a greater diversity in tourist types who will arrive in subsequent months will once again improve Dana’s cash flow, that isn’t very comforting in the short term for a business in which the margins are already very tight.

It’s not just properties like Dana’s that are affected. Another popular hotel in the same area of Manuel Antonio reported that the average room rate was down by 20%. However, because it’s a bigger property with a larger number and greater variety of rooms, they’re able to be more flexible on rates.  In addition, they can spend more heavily on marketing and have staff 16 hours a day, 7 days a week working to fill rooms. So they’re more able to weather the weak periods than folks like Dana.

And, it’s not just room rentals that are affected. Restaurant and organised tour sales also suffer when the market is dominated by budget travellers.

The complicated influence of OTAs

Relatively recent changes in behaviour by OTAs (online travel agencies) has been in a big factor in the current market situation as well. In the last two years, booking.com (the largest booking site in world) really got into listing STRs like Airbnb and VRBO. Booking.com is also where the budget traveller tends to shop, compared to others like Expedia.

When budget travellers search for accommodation, they typically sort the results by price, low-to-high. Unless they exclude STRs from their search, those are what are most likely to show up higher in results, since they can offer lower rates by not paying taxes and licensing fees. Other similar-category properties (like Dana’s) might provide better value and visitor experience, and therefore might be chosen despite a slightly higher price. But with the increased numbers of STRs, Dana’s property may not be high enough in results to even be seen.

Adding fuel to the OTA/STR dumpster fire is the weak market for tourism within the country by nationals. The Costa Rican economy has been contracting for the last 4-5 months, and combined with concern about taxation, increasing unemployment, and subsequent political uncertainty, Tico tourism has been contracting along with it. Ticos, who travel as families more frequently than foreign tourists, often seek accommodations in budget categories and are increasingly dependable users of OTAs. This is putting further pressure on budget category properties

There may be other factors. For instance, how many newly-opened rooms (legal or STR) have diluted the market since last spring? Has the demographic profile of the typical tourist been changing (ie: is the average tourist choosing Costa Rica more frugal than in the past)? Some have argued that increased taxes, or poor state infrastructure, are factors, though these seem less arguable, as recent changes in these areas have not been dramatic.

It’s likely that whatever changes are underway – if, in fact, any are – the effects are a more complex combination than a single factor. Given the apparent discrepancy between air arrivals and room bookings, though, we’d be remiss not to be concerned about the effects of increasing short-term rentals. It seems only fair that Dana should be competing on a level playing field. Since STRs have grown from a niche to a significant market force, it seems only just that STRs should now be subject to the same taxes and fees as all other tourism businesses. Otherwise, a great many small businesses like Dana’s may ultimately be driven out of business, and Costa Rican citizens may find themselves increasing exploited by an economy that uses the country for profit, but leaves a decreasing amount of that profit here to fund social services and infrastructure.

It will be interesting to see how the implementation of the VAT will affect the industry. We don’t claim to know what’s going to happen, how all of this will unfold. Why don’t you tell us what you think?

* The full ICT report can be viewed here.

How does Costa Rica plan to attract a million more tourists...

James Dyde on alternate proposals to the IMF