Many Costa Rican tourism operators watched with dismay what was happening in the Dominican Republic around tourists possibly poisoned by tainted alcohol, and now a tainted alcohol crisis of our own has arrived. The sensational headlines, however – inspired by “if it bleeds, it leads” newsroom priorities – fail to make some key distinctions that are confusing for tourists. Here’s what you need to know to re-assure visitors who may be expressing apprehension about visiting Costa Rica:

We’ve created a summary of these points in a sharable infographic that you can give to you prospective guests or to your staff who communicate with them. Download it here: [PDF] or [JPG].

We have included links below to just a few of the stories (and a couple of ridiculous graphics) to give you an idea of what your guests may be reading. Whether this will impact tourism remains to be seen. In the meantime, we hope that the health ministry will bring this crisis quickly under control, for the safety of Ticos and tourists alike.

Update, July 24: delfino.cr is reporting that “Health Minister Daniel Salas Peraza issued a resolution that totally prohibits the commercialization of “Guaro Montano”, “Aguardiente Timbuka”, “Aguardiente Molotov”, “Aguardiente Barón Rojo”, “Guaro Gran Apache”, “Aguardiente Red Roja” and “Brandy Sachetto. This resolution was published on Wednesday in the Official Gazette and orders, immediately, that the health areas of the country cancel the sanitary operating permits to establishments where it is discovered that they continue to market these now prohibited brands.“ 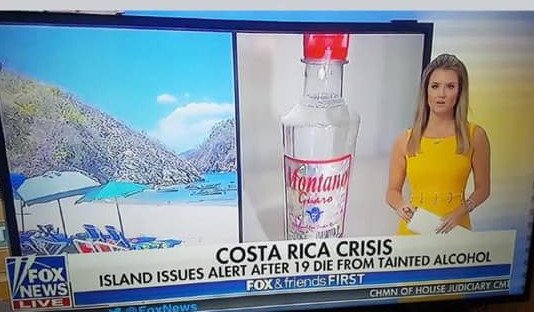 Despite What You’ve Read, Costa Rica is Safe