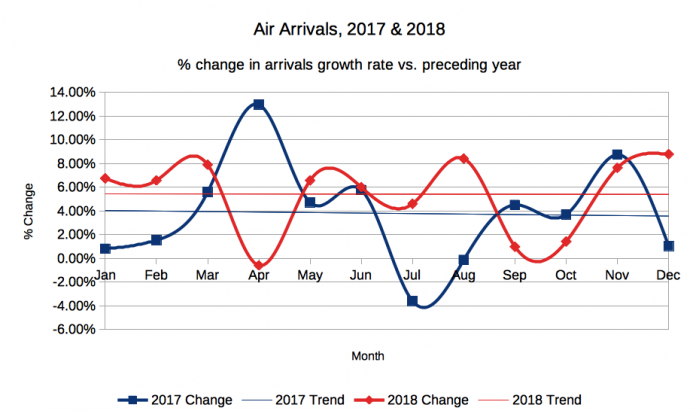 The June stats from ICT were released this week, and things are looking a bit better than they did last month. Is a rebound underway? While we wouldn’t presume to read too much into a single slice of a statistical report, the numbers suggest a possible end to what many see as a recessive trend, causing a few tentatively hopeful exhalations.

As we described previously, the April and May numbers caused a buzz among those in the tourism sector, who took them as further evidence of an emerging travel recession. This fear was fuelled by pre-existing concerns among hoteliers and others, some of whom have been reporting lower occupancy and revenues. Combine the rumour mill with some lacklustre ICT reports and something like an underlying mild panic set in.

The stats we’re talking about when we talk about “numbers” are those that reflect the rate of growth (compared to the same month of the previous year) in arrivals to Costa Rica via aircraft, which includes any type of air traveller, but can reasonably be presumed to largely reflect tourism travel.

Those numbers for June (arrivals up 1.7% over June 2018) do look better than May (arrivals up only 0.5% over May 2018), but they’re still not as good as April, which was considered a weak month (2.19%) compared to January, February, and March, which all showed fairly strong growth (9.3%, 6.4%, and 5.2%). The growth trendline has definitely been sloping downward all year. June was the first month that defied the trend, albeit slightly.

It’s important to keep in mind, though, that while percentages are handy for general comparison, they don’t necessarily reflect reality very well. For instance, June arrivals were up 1.7% over 2018, but in real numbers that means 3,311 more people got off planes in Costa Rica this June than did last June.

What we don’t know is what those 3,311 people did after they got off their planes. Did more of them choose off-the-books STRs (short-term rentals like Airbnb, as we discussed last month)? Were many of those business people arriving here for meetings and conventions? (La Republica recently reported that Guanacaste was rated by Cvent in its most recent annual report as the 11th best city in Latin America for meetings and events (though Cvent’s own site says it was #8), and that San Jose was 24th – the first time San Jose has ever appeared on the list.) 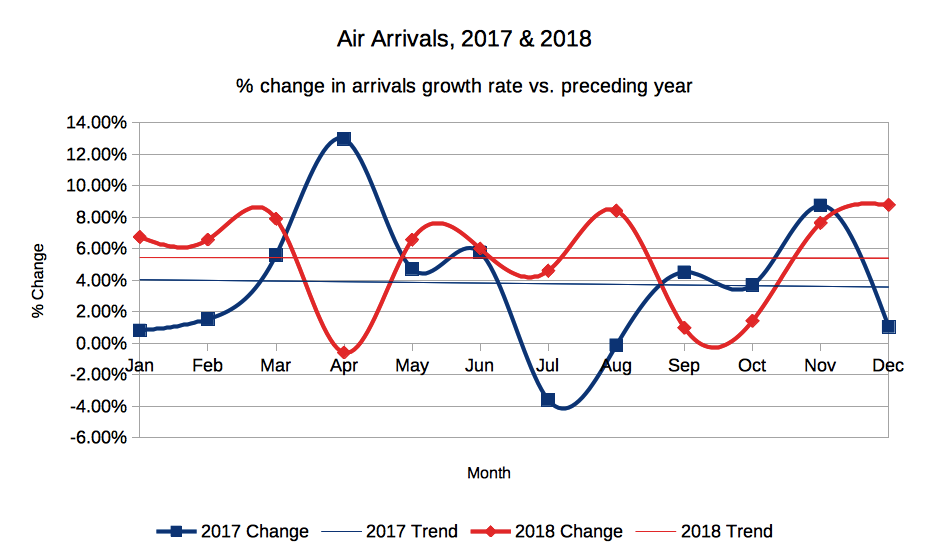 There’s significant variability between these two years. Note especially the month of April: in 2017 April saw 22,486 more arrivals than in 2016, but in April 2018 there were 1,192 fewer arrivals. Similar, if less dramatic, variations happened throughout the year. Either ICT’s stats are suspect, or arrivals volatility in Costa Rica isn’t unusual.

Explanations for these apparent examples of volatility in arrivals, as well as this year’s apparent growth shrinkage, could be many, from threatened or actual labour disruptions that discourage tourists, to changes in how airlines or OTAs display vacation options.

Whatever’s going on, the vacation marketplace is continuing to undergo disruption and change. Whether the pattern next month is up or down, those in Costa Rica who rely on tourists for their livelihoods could do worse than to think about ways to be innovative and creative, not just in providing guests with uniquely meaningful vacations when they’re here, but perhaps more importantly, being innovative and creative in the ways that they attract visitors in the first place.

Best Vacation Destinations? Costa Rica one of them, says Travel +...