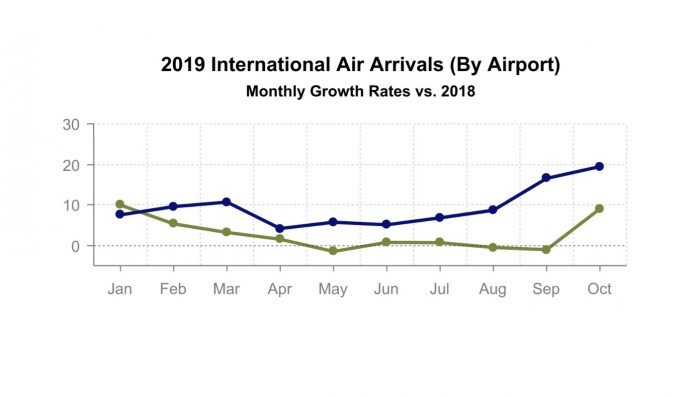 After lacklustre growth in tourist arrivals over the spring and summer, the October stats from ICT are giving Costa Rica’s tourism professionals something to feel more optimistic about as we move into high season.

While occasional months with low growth are not uncommon, especially in low season months, 2019 was the first year in recent memory that we saw persistent low growth trends over six consecutive months (April through September) when comparing market growth over the previous year.

As we reported previously, the numbers in August continued to reflect an apparently ongoing contraction in arrivals growth. Despite the fact that none of these months saw decreases in arrivals — growth in arrivals over the same months of the previous year was still net positive — many observers expressed concern that the ongoing low growth might imply a recessive trend, or that new taxes and regulations imperilled the tourism economy.

If you’re among those who worry that the sky is falling, you might therefore feel cheered by ICT’s recently-released arrivals numbers for October.

According to ICT’s report, air arrivals in October grew by 10.7% over the same period last year. For Juan Santamaría Airport (SJO) in San José, its share of the growth, at 9%, was a refreshing change of direction after a mostly flat (and occasionally recessive) year.

That 9% pales in comparison to that of Daniel Oduber Quirós (LIR), however, which saw a whopping 19.4% increase in arrivals over October 2018, continuing what has been a very positive year of growth for that airport.

Here’s another interesting angle on the numbers: while 2019 has clearly been one of the weaker years of the past five for arrivals growth, it had the worst growth rate of the five in only two months, May and June. By no measure does 2019 come close to the banner year for growth we saw in 2016, but 2019 was somewhat competitive with 2015, 2017, and 2018 – hardly the unfolding disaster that some have been trumpeting.

The pessimists among us can get a lot of attention with doom-and-gloom prognostication, but loudest doesn’t necessarily mean most accurate. It’s possible that recent tax and regulatory changes that affect the tourism industry have and will continue to negatively impact on whether people will choose Costa Rica as their vacation destination. But it’s possible that they won’t, either, and may in the long run even help the industry.