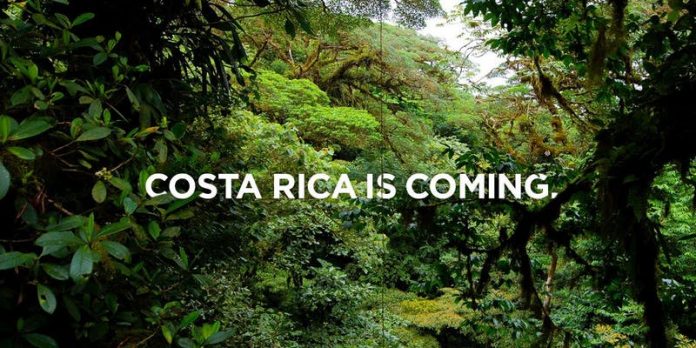 On September 24, prior to his speech in front of the 74th General Assembly of the United Nations, Costa Rica’s President Carlos Alvarado made a visit to the Essentials Costa Rica campaign site at Brookfield Place in the World Financial District of New York City. He was accompanied by First Lady, Claudia Dobles, and Minister of Tourism, Maria Amalia Revelo.

As part of its two-year United States and Canada promotional tour, the Costa Rica Board of Tourism (ICT) set up camp in NYC under the auspicious advertisements, “Costa Rica is coming” and “…an opportunity to connect with the essence of life: nature, well-being, culture, and adventure.”

Through a virtual full-sensory immersion, ICT recreated the essence of a Costa Rican rainforest inside the container-sized Essential Costa Rica bus. The experience was delivered through 360˚ image transmissions depicting the country’s natural treasures, including lush flora, wind and atmospheric effects, and clever lighting.

Those entering the supped-up container during the 10-hour transmissions on September 25 were transported into a digital version of Costa Rica’s tropical forests where 6.5 percent of the world’s biodiversity is staunchly protected.

“It is very important for today’s consumers, because it addresses the social need to reconnect with nature and each other, to take notice of the important things around us, and that we believe Costa Rica makes possible. Precisely said, the elements of this campaign offer an opportunity to connect with nature, well-being, culture, and adventure,” said Minister Revelo.

Reviving tourism in the country is the first step in President Alvarado’s plans to jump-start the Costa Rican economy and create jobs. Tourism is the source of 8.2% of the country’s GDP and the sector represents 9% of the nation’s employment supporting thousands of families, according to ICT. “It is my absolute commitment that the Government must work fully in the cause of employment generation and economic growth,” said Alvarado at the plan’s launching.

The “Only the Essentials” campaign will target outdoor advertising media like buses, subways, taxis, and billboards, as well as on internet and news provider platforms. The campaign will appear in at least 20 major U.S. and three Canadian cities. 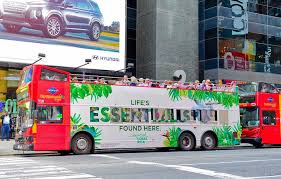 On October 1, ICT will distribute 2,500 cups of free Costa Rican coffee to passersby at the historic Union Square in NYC. The coffee will be served in recyclable cups and provide a taste of Costa Rica’s authentic culture and dedication to sustainability.

During his speech to the General Assembly, President Alvarado pushed for peace and environmental conservation as well as the need for the world to take action to solve global crises before it’s too late. He also moderated a session on the UN Sustainable Development Goals, where he emphasized Costa Rica’s advancements in addressing the Multidimensional Poverty Index and pushing its National Decarbonization Plan.

AM Costa Rica reports that ICT was in New York over the weekend, promoting Costa Rica in conjunction with International Coffee Day celebrations, at which “more than 2,000 servings of coffee in reusable cups were given away, as well as flyers to give information about Costa Rica as a tourist destination.”

A part of the Only the Essentials campaign, the event used colourful Costa Rican oxcarts from which to disperse the free coffee and promotional literature. Apparently the coffee was very popular, and more than 2,000 New Yorkers took advantage of it.