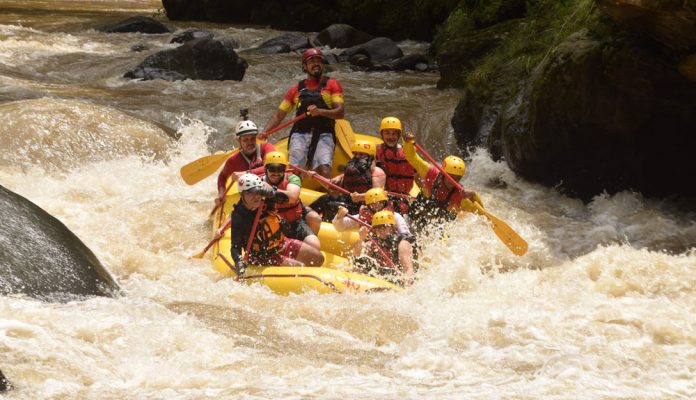 (A translation of an article from Oxígeno)

Managing risk for an optimal future. That was the motto of what has been the first World Summit of Whitewater Rafting , held in Costa Rica last week, which during two days we have attended rafting operators, experts in different subjects and media from around the world .

“A historic milestone in tourism and rafting in Costa Rica.” This was defined by the organizer and promoter of the initiative Rafael Gallo , honorary president of the International Rafting Federation and founder of the Ríos Tropicales company, in the previous press conference in which he was present with the president of the Federation Joe Willis , and the Minister of Tourism of Costa Rica María Amalia Revelo .

The Summit is the perfect opportunity to explain our sport and show it to the world. Joe willis

For his part, Joe Willis declared that the summit was “the perfect opportunity to explain our sport and show it to the world,” while María Revelo stressed that “precisely because rafting is not a risk-free sport, it is important to work in security protocols, because it is the key for millions of tourists to continue to go to Costa Rica. ” The Minister did not want to ignore Costa Rica’s commitment to sustainability, noting the fact that the Summit coincided in time and place with the previous meetings of the Pre-COP , to the Conference on Climate Change in Chile.

“The summit is the ideal space for us to generate changes in safety protocols and rafting operation,” said Rafa Gallo. And so it was, since during the two professional days of more than twenty rafting companies in the country they had the opportunity to learn, discuss and share experiences in legal, technical and safety issues.

For example, Tim Marshall , IRF rafting guide instructor, president of the New Zealand Rivers Association, and owner of the Ultimate Descents rafting company in New Zealand, spoke about “The future of training and education guides the IRF ”; Julie Munger , CEO and co-founder of Sierra Rescue International and Regional Director of the West for Rescue 3 International in the US, on “Latest innovative techniques for rescue in fast waters and emergency management in remote areas”; or Ena Buenfil , owner of Huaxteca Expeditions in San Luis Potosí, Mexico, on “Drugs and alcohol in rafting”.

In the same technical line, Jim Davis , owner of Ace Adventures & Hideaways in Scotland and member of the Scottish Rafting Association talked about “Insurance and litigation: problems affecting the rafting industry”; and his partner Mark Hirst , instructor of the IRF and Rescue3 Europe, owner of Lapin Koskikoulu , world-wide company of training of rafting and rescue guides in fast waters in Finland, gave one of the most participatory and interesting technical talks with “Overcoming the barriers of the language: How to make a universal safety talk? ”

A photo of the Two Mountains canyon of the Pacuare River presides over the stage. A very significant image, both for being a very representative place of the most famous river in Costa Rica for whitewater lovers, as a symbol of the defense of the rivers, since the place was the scene of one of the activism scenes most famous of the last decades in the country: the place where several activists camped to prevent a dam from being built.

Rafael Gallo in his presentation “Rowing for Peace in Colombia”

“We have to defend the rivers, they are much more threatened now than a few decades ago. Who knows the rivers better than us? ”Asked Joe Willis . “If we don’t do it, who will? And if not now, when? We need to do it, please. Let’s unite to defend what we love most. ” A few words that served as a preview of what we might consider the second block of the Summit: the conservation and defense of the rivers.

The rivers are much more threatened now than a few decades ago. Who knows them better than us? And if we don’t defend them, who will? And if not now, when?

And here he undoubtedly highlighted the presentation on “Environmental risks facing rivers and how we can be good Guardians of the Rivers,” by documentary director and environmental activist Monti Aguirre , Latin America Program Coordinator for International Rivers . ”60% of the world’s rivers are affected by the same problem: dams, which are counted for more than 50 thousand across the planet, ”said the activist. “The environmental impacts of dams are also linked to other human and social impacts, which are suffered mainly by minorities such as indigenous communities or women.”

A vision shared by Roberto de la Ossa, stating that “there is no greater enemy for a river than a dam, and if there is a country that has mistreated its rivers, it is Costa Rica.” In this regard, the founder of the National Alliance of Rivers and Basins of Costa Rica commented that “70% of Costa Rica’s energy declared green is hydroelectric, and is a wrong model.” For Roberto “Costa Rica is a country blessed by its nature, if we focus on its protection we will be much richer.”

Costa Rica is a country blessed by its nature, if we focus on its protection we will be much richer

But one of the most emotional moments of the Summit came with the presentation of the Minister of Environment and Industry of Costa Rica, Carlos Manuel Rodríguez . The minister, who participated as a lawyer in the defense of the Pacuare in the eighties and could not avoid a comment about it when seeing the photo that presided over the scene, made an emotional speech defending the rivers. “The energy model based on hydroelectricity will change, because it is collapsing, and does not take into account the environmental and social costs involved,” said the Minister. “And there is a perverse relationship between economic growth and energy demand, and when that relationship is broken it proves to be more efficient.” However, the applause came when he announced “we are looking to dismantle a dam in the Central Valley.”

Other interesting presentations in a more social framework came from social entrepreneur Ken Streater and his keynote presentation on “Rafting guides and companies: transforming their communities and the world”, or Rafael Gallo , participant in the RAFT Project (Russians and Americans for the teamwork), and co-founder of the Paddling for Peace initiative in Colombia.

“I have been rafting in my life for 45 years, and it is normal that the first summit was here, because it is undoubtedly one of the best and most beautiful destinations in the world,” said Joe Willis before closing the two days of conferences and giving Step into action on the Pacuare River . And we have to say that we agree.

The Summit was closed, as you could not be otherwise, with a symbolic day of rafting and friendship on the Pacuare River , in which we participate both operators, speakers, press, personalities and friends of the sector. A celebration of everything that unites us as an industry and as a family around something as important and symbolic as rivers.

After the intense decline, the event was closed in a celebratory atmosphere in the facilities of the Ríos Tropicales company, with the delivery of the “Rafael Gallo Palomo Award” of the National Alliance of Rivers and Watersheds of Costa Rica, to the Río Urbano organization , for its defense of the urban rivers of Costa Rica. A moment in which I remembered the beautiful words of the Minister of Environment of the country the previous day: “Your grandchildren will use rafts to run clean and free rivers of Costa Rica, and they will fish and bathe in the rivers that our grandparents did ” We provide for it.

Rafting words in the languages of the world