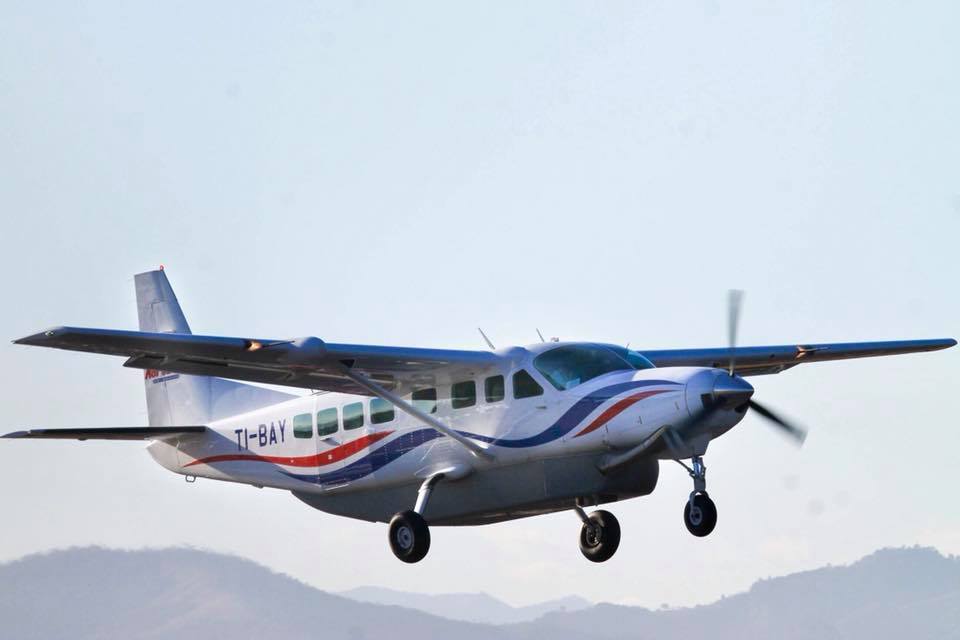 Anyone who has spent time in Costa Rica knows the country’s road infrastructure can leave much to be desired.

Meanwhile, two other airlines are planning routes throughout Costa Rica.

All of Costa Rica’s domestic airlines feature an online ticket-booking portal, and they also partner with travel agencies on commission.

We take a look at these airlines and the traits that set them apart from their peers.

Overview: Aerobell Airlines offers daily scheduled flights to 12 destinations across Costa Rica. With listed prices starting at $65 for a one-way ticket, they are often among the cheapest option. Aerobell’s base is Tobías Bolaños International Airport.

What sets them apart: Much like a larger airline, Aerobell sells tickets in different fare classes. Their cheapest ticket still has a baggage allowance, but their most premium options provide priority boarding, more luggage, and credit toward future flights in case travel plans change. Aerobell also touts its 30-year history as a charter company and says it’s the only current operator with new Cessna Grand Caravan EX aircraft equipped with state-of-the-art Garmin G1000 NXi navigation systems.

Policies for travel: All tickets through Aerobell are nonrefundable. Depending on the fare class purchased, you may be

able to make changes to your itinerary for an additional fee of $20-40. Contact Aerobell at 4000-2030 or via the email portal on their website.

Pets weighing less than 15 pounds can be taken on-board, though an extra fee may apply.

Rates: One-way tickets start at $65 and can reach $160 for domestic destinations. While this includes a luggage allowance, oversized sports equipment, such as surfboards, costs extra.

Bio on company: Aerobell was founded in 1988. The airline operates a fleet of Cessna Grand Caravans for its scheduled flights, including several new aircraft which were delivered from the manufacturer in late 2018. It is part of Aerobell Group, which features charter services and a flight school.

Future plans: Aerobell is currently seeking government approval to fly to Bocas del Toro, Panama. They told us their goals include expanding and growing business for charter and scheduled flights throughout Costa Rica.

What sets them apart: As the name suggests, Green Airways promotes its environmental commitments. The airline hopes to be carbon-neutral certified in 2019 and promises to plant the seed of an endemic tree for every passenger who flies with them. Green Airways also operates an entirely twin-engine fleet for its passenger service.

Policies for travel: Costa Rica Green Airways says it works with several travel agencies and offers commission on sales. Contact them via their website’s chat portal, via email at customercare@costaricagreenair.com, or via telephone at 4070-0771 (Costa Rica) and 888-828-8471 (United States).

Tickets are non-refundable. Travelers can change their flight dates for $25 (plus the fare difference). Depending on availability, you can make free same-day flight changes.

Rates: One-way tickets between San José and Tambor cost about $110. The fare includes same-day flight changes and checked luggage — including a surfboard at no additional cost.

Bio on company: Green Airways was born out of CarmonAir Charter, a charter service serving Costa Rica that was founded by a father-and-son Tico pair in 2009. The airline promotes itself as a locally owned family business.

Future plans: Green Airways plans to expand its route network to Quepos and Nosara in the coming months.

Overview: SANSA flies to 15 different destinations in Costa Rica, in addition to a new route to Nicaragua from San José, Liberia Sansa is only airline that services Limon (Puerto Viejo & Cahuita) with 3 flights daily (talk of increasing to 4). The airline operates a fleet of Cessna Grand Caravans.

What sets them apart: With a hub in both San José (SJO) and Liberia (LIR), SANSA currently boasts the most extensive route map. The airline also touts its on-time performance, young fleet and partnerships with Avianca. It is a carbon-neutral airline and offsets carbon emissions in a partnership with Costa Rica’s National Fund of Forest Financing.

Policies for travel: SANSA partners with travel agencies in exchange for commissions. In addition to their scheduled and charter services, they offer airport-to-airport transportation of cargo and courier. Contact their administrative offices at 2290-4100 (Costa Rica) or 877-767-2672 (United States), or via email atreservations@flysansa.com.

Tickets are non-refundable and non-transferrable. They also offer discounts for Costa Rican citizens and permanent residents, and for large groups.

Dogs and cats can be transported in the baggage compartment for a $30 fee.

Bio on company: SANSA was founded in 1978 as the domestic branch of LACSA, Costa Rica’s international flag carrier. SANSA maintains partnerships with Avianca and offers charter and cargo service in addition to their scheduled routes.

Future plans: SANSA has promised “many surprises and many adventures” in 2019, though they have not made specific plans public. An airline representative said the airline will “continue its project to connect Costa Rica through the air.”

What sets them apart: Skyway says its larger airplanes provide a superior passenger experience. The airline also offers vacation packages and offers direct flights between Arenal and Quepos, Arenal and Liberia, Arenal and Tamarindo, and Quepos and Liberia.

Policies for travel: The airline doubles as a travel agency, boasting a network of travel specialists to plan vacation packages. Skyway has partnered with Adventure Air helicopters and hotels throughout the country to bolster the experiences they offer.

All tickets through Skyway are nonrefundable. Changes to existing reservations incur a $15 fee.

Pets can be brought on-board with prior notice, though an additional charge may apply.

Rates: Skyway’s “last-minute” deals start at $49 for a one-way ticket. They sell different fare classes that include a higher luggage allowance and more flexibility with ticket changes. Skyway also offers discounted rates for citizens and residents via their telephone operators.

Bio on company: Skyway began domestic flight operations in November 2018. It is a subsidiary of Air Tec Global, a company based in the island country of Mauritius that has operated as an “authorized aviation services provider” for the United Nations, according to a statement from Skyway.

TAC Airlines will begin operating flights throughout Costa Rica in March 2019. They have begun accepting reservations.

Their terms and conditions say tickets are non-refundable, and changes to reservations will not be allowed. TAC has a dedicated “partners reservation platform” for travel agencies page on its website, but the service has not yet launched.

Nature Air is reportedly seeking to resume operations in Costa Rica. They have not publicized any further details about those plans, and as of January 2019 their listed phone numbers remain disconnected.